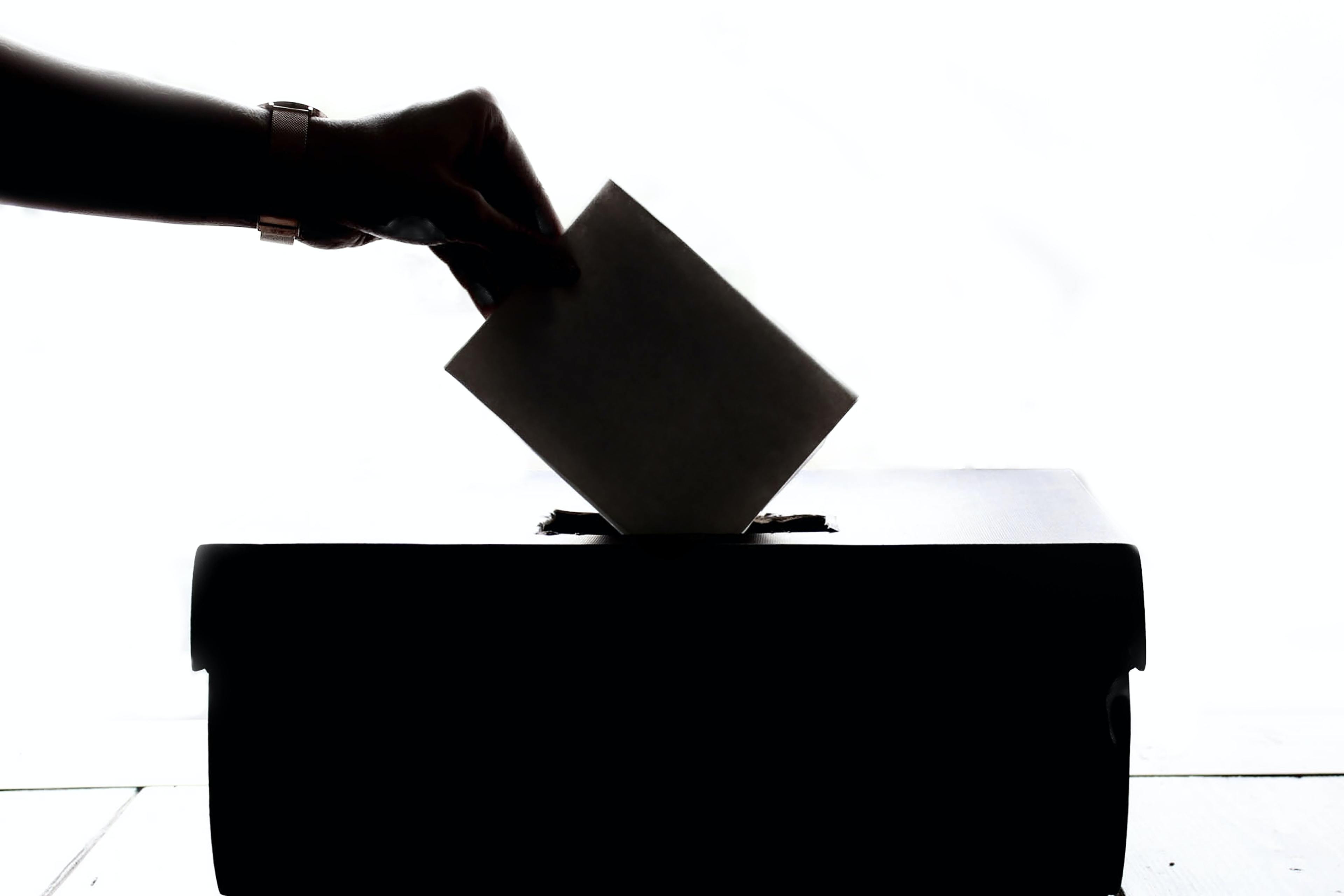 How TV data can predict the election outcome!

The election is top-of-mind for people in the US right now. While we have no intention of predicting the outcome, we have data and some unique insights that might help you formulate today’s winner.

Vice versa, political campaigns influence the TV media market. We already shared all of this (along with media buying recommendations) to our clients in the last few months.  Today being election day, we are now sharing it with the general audience as well.

Traditional industry outlets like Nielsen reported lower viewership numbers for the final presidential debate. However, focusing on that single metric doesn’t tell the full story. At Tatari, we examined additional key metrics like viewership share and retention rate of right- vs. left-leaning networks (e.g. Fox News vs. CNN). This can give us insight into voters’ viewing behavior.

Viewership share indicates how the viewership is distributed across networks. For example, the percentage of debate viewership on Fox News compared to all viewers of the debate would be the Fox News viewership share. Further, we classify each network by right-leaning (FOX, Fox News), left-leaning (CNN, MSNBC), and center/neutral (ABC, CBS, NBC). From the chart below, the viewership lean of the final presidential debate is notable compared to the earlier debates. While the share of viewership on left-leaning networks declined from 17.3% to 12.7%, the share on right-leaning networks increased from 26.6% to 29.2%. 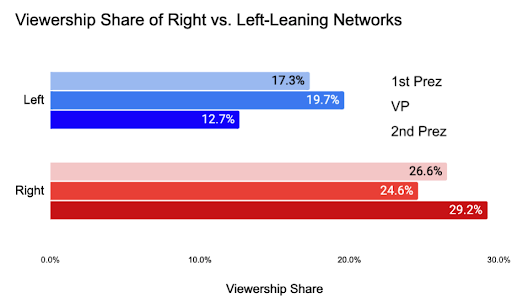 Retention rate indicates what percentage of viewers who started watching a program continued to watch the program until the end. It’s a measure of engagement with the programming, and similar to the above, we can break this down by political lean. The retention rate of left-leaning households (HH) and networks trumps (no pun) that of right-leaning ones. 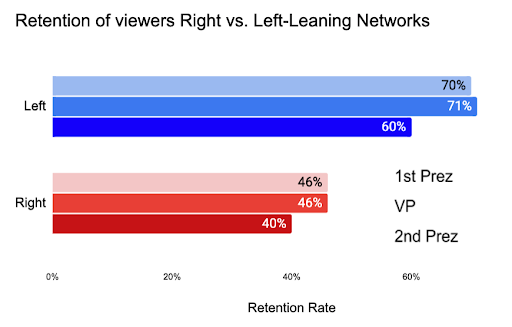 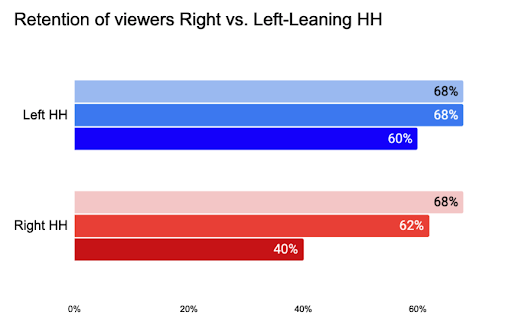 So what does all of the above tell us about today’s outcome? Viewership supports a theory that right-leaning voters were more engaged, suggesting that they are still open to voting for Biden-Harris (while the lower tune-in of left-leaning voters indicates that this group has already made its decision, and doesn’t need to see more). But the reverse could be argued as well: right-leaning voters remain engaged and point toward a higher voter turnout; this theory, however, is not supported by retention data. So where do we go from here?

The two separate and directly competing town halls (Joe Biden on ABC and Donald Trump on NBC) may give us that final clue. By computing cohorts for each candidate (watching at least 45 min of the town hall), smart TV data shows that ~60% of viewers only watched a single town hall.  Right-leaning viewers, however, were more prone to hearing out Biden, too!  These TV viewers could just be the tie-breakers (?).

What is for sure is that the Biden-Harris campaign outspent Trump-Pence in the key swing states. The chart below shows the ratio of Biden spend per capita to Trump spend per capita (in the last two months). This further supports a possible theory of a Biden victory (see above).

TV Ad Spending and the impact on clearance

The presidential campaigns have been ramping up spend for the last 6 months. In the last 3 months alone, Biden outspent Trump on TV with a factor of two. 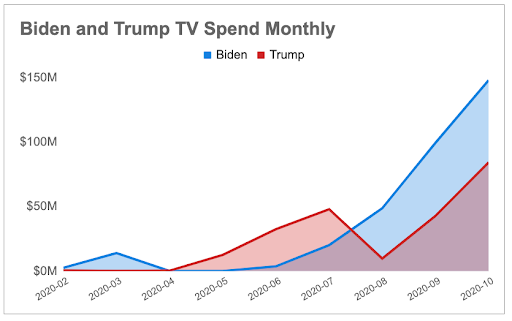 We predicted months ago that political campaigns would bid top dollar for inventory, and that would cause prices to rise and clearance to decline for many TV advertisers. Streaming was not immune to these same issues as most viewers binge-watching were served an abundance of ads for both local candidates and ballot propositions (in addition to the campaign ads by presidential candidates and political action committees). The chart below shows this downward trend on streaming clearance which led to many brands turning to guaranteed streaming and NPE linear ad buys as part of their already agile Q4 TV strategy. 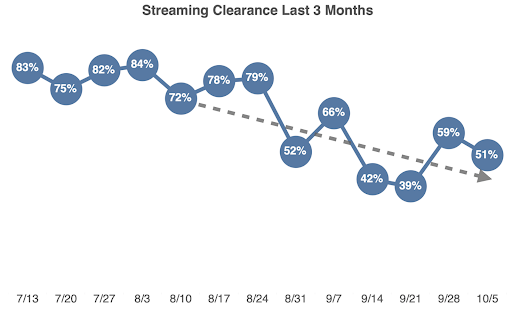 It’s been widely reported that we may not know the results of the election for weeks (and our prior analysis may just have been in vain...). However, we do know that as the campaigns end today, it should create some available remnant inventory. Brands that haven’t planned ahead could still have trouble securing buys and clearing as we head into the next phase of Q4- Black Friday and holiday shopping campaigns. 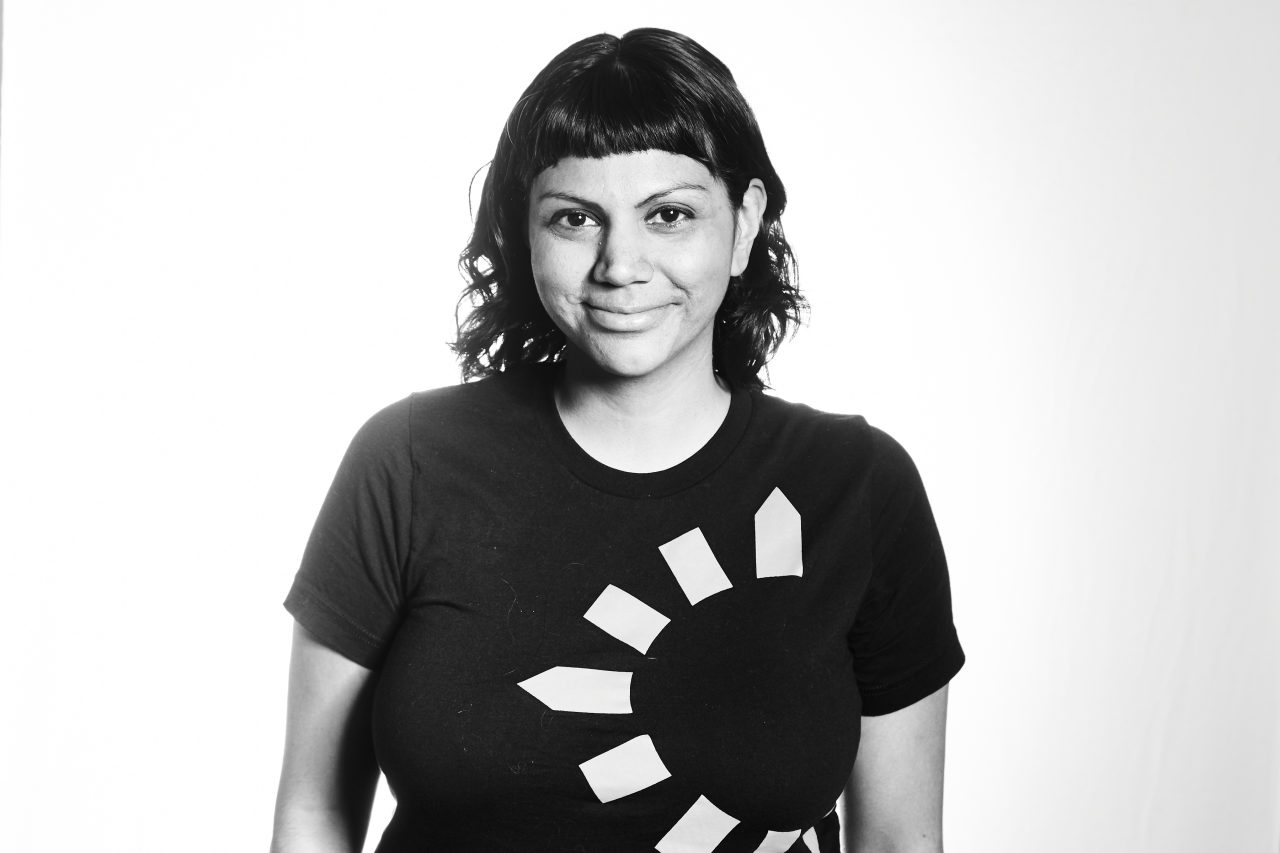