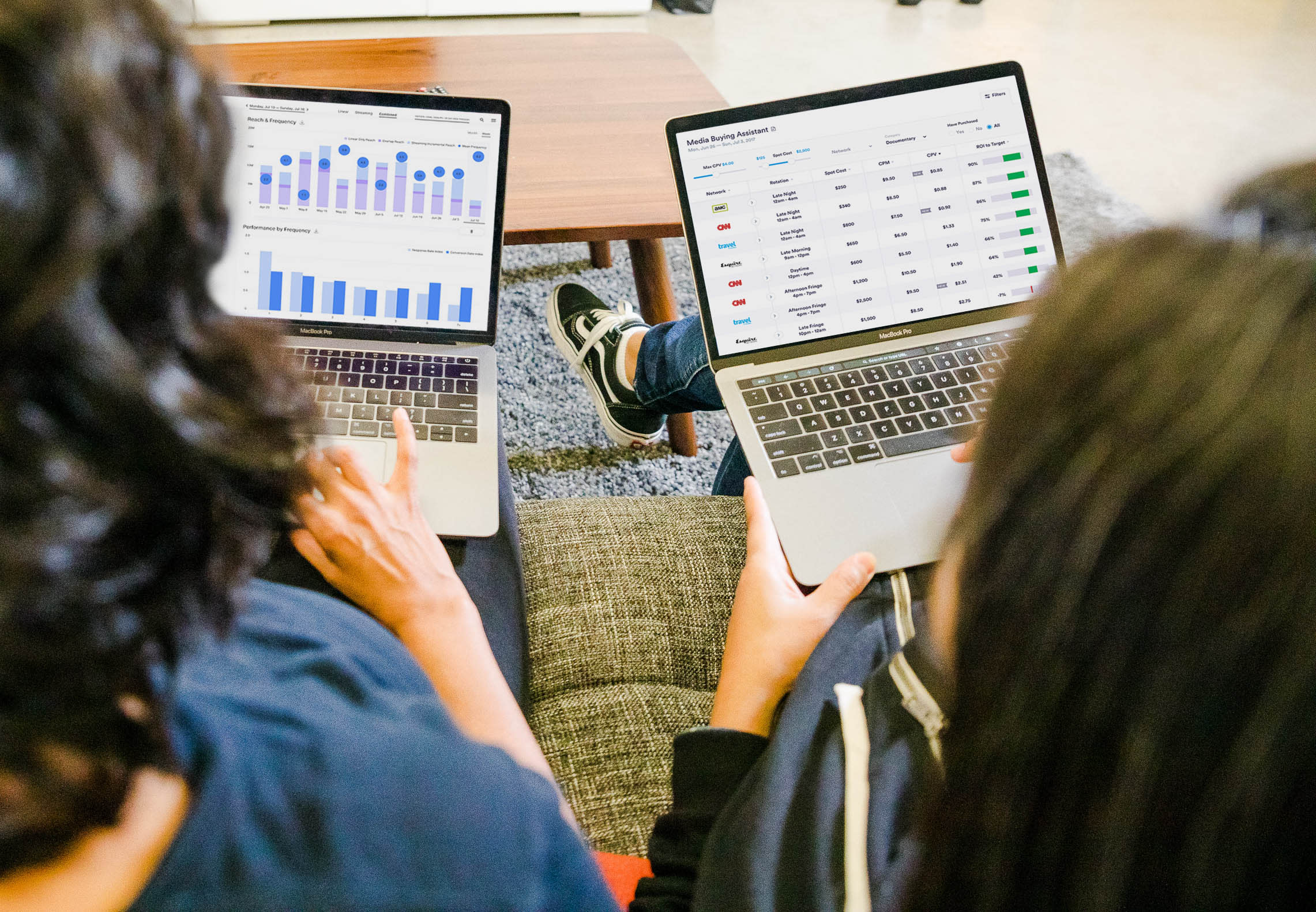 Learn how Tatari clients stayed ahead of the Coronavirus (and how you can, too).

Coronavirus continues to cause most people and industries to adapt everyday, and the same goes for all involved with TV advertising. Tatari has published daily (and intra-day) updates with our clients, and we summarized some from this past week below. Not everything is actionable anymore (but let us know if you want to stay in the loop and get real-time pricing); it is merely intended to help you understand how Tatari clients have stayed ahead in these difficult times.

TV viewership is up. You know this already. News is leading the pack (see table below) but even kids networks continued to see increased viewership. For example, Boomerang is up 2x! Expect further increases this week with more school closing. 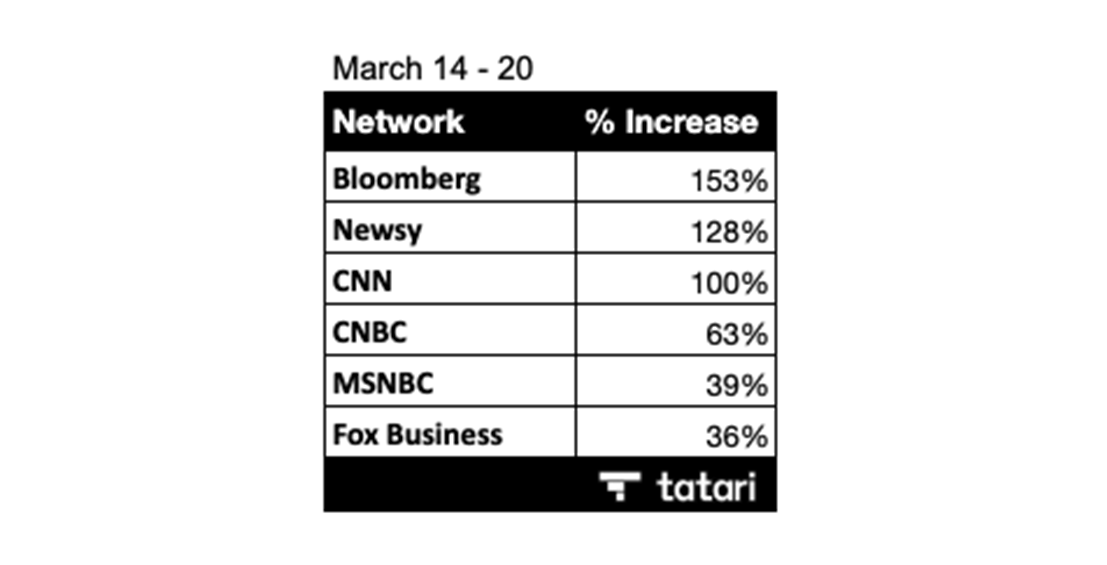 We peeled the onion a little further by examining dayparts. Daytime viewership is up 8% - 20% (and can make for smart buys). For example, Tuesday’s prime time viewership was down nearly 15% compared to Jan and Feb levels. This is due to less original first run programming and sports cancellations. 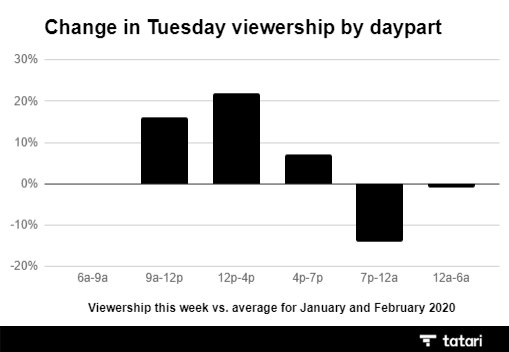 Speaking of sports, the histogram below shows how a cohort of ESPN viewers (in the 2 weeks prior to league cancellations) diverted their attention to movies, cooking and home improvement. The unsurprising exception is NFL Network, which has drawn most of its attention due the start of free agency and coverage of players signing with new teams. 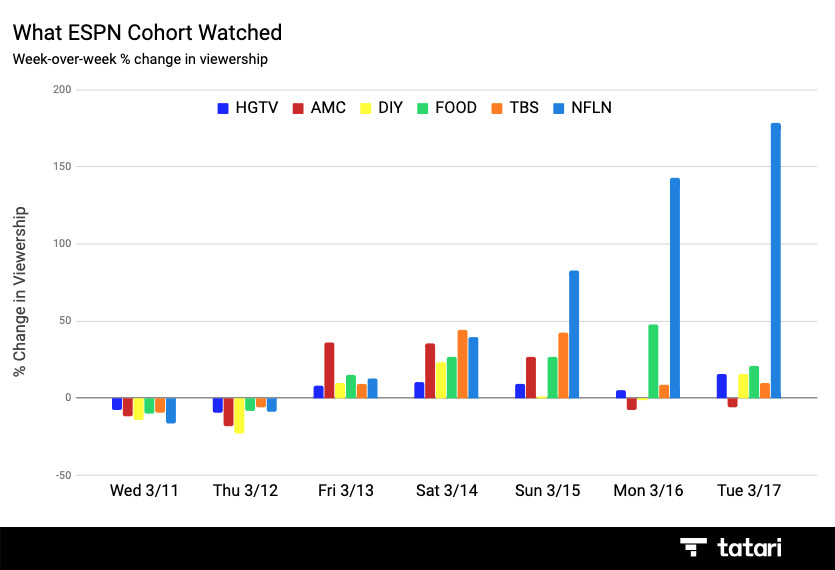 Last but not least, streaming is also on the rise. For example, CBS is telling us that they’ve seen their highest number of streams ever in the past few days across major markets like NY, LA, Boston, SF Bay Area, Minnesota, Philly, Denver and Pittsburgh.

If you’re looking to reach sports audiences, some relevant programming to be aware of:

Streaming publishers are starting to offer free access to in order to win some goodwill and potentially attract subscribers in the long-run.

Because of programming adjustments and pullback by advertisers in affected industries (e.g. travel), firesales are abundant.  Proactive Tatari clients are gaining exposure to new audiences at a fraction of the cost, often achieving DR-like results on (high-reach) brand buys.

Below is an example for American Idol and Shark Tank.  Tatari clients appeared next to big brands like Discover, Kellogg’s, Subway, Ziplock, and Facebook. With discounts of upwards of 70% in some cases, they were able to put their ads in front of over 200% more viewers than they normally would have per dollar spent-- creating a tripling of performance. 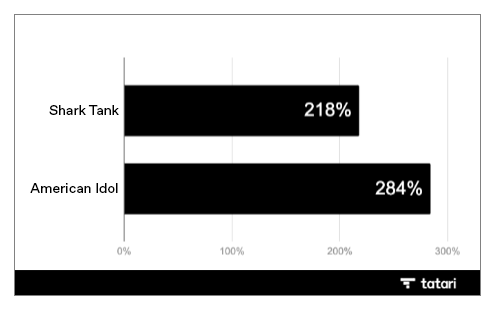 Other notable opportunities our clients are taking advantage of this week were on popular news shows.  They are also finding sports audiences on the aforementioned reruns of classic march madness games and sport-specific networks covering NFL free agency.

Last but not least: if you can, stay at home (and keep it healthy).  We have a special call-out for two of our clients, Roman (offering telehealth assessment) and EverlyWell (providing COVID-19 test kits at costs). 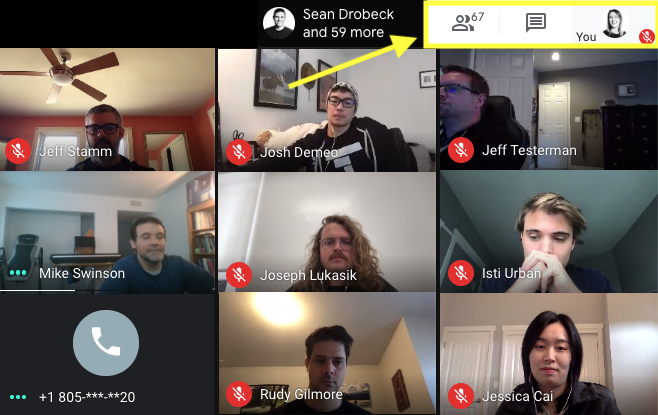 How TV advertisers need to respond to Coronavirus

COVID-19 has become a reality for everyone. Learn how TV markets are being affected and how TV advertisers need to respond.