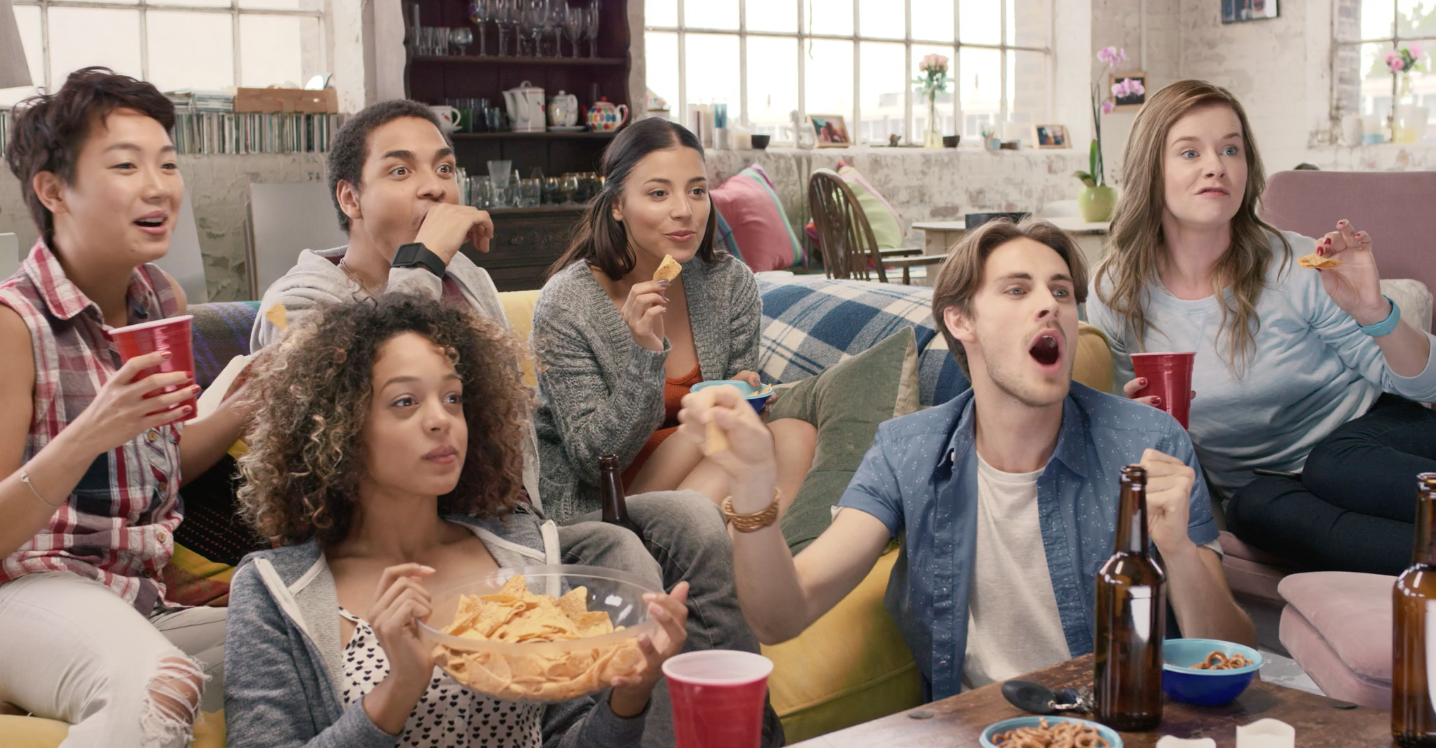 How to Advertise on Super Sunday without Spending $5M

This year, the Super Bowl is making as many headlines for the brands that aren’t in it as for those that are: Coca-Cola, Pepsi, Budweiser, Audi, and Hyundai have all announced they are staying on the sidelines or reallocating time for other purposes. These brands have found other creative ways to make the most of their “absence” from the game by generating positive PR and reallocating investment to other channels. It’s also a bit misleading: Pepsi is still the Halftime sponsor and Anheuser-Busch has purchased a full four minutes of in-game airtime - just not for its flagship Budweiser brand.

For these large advertisers, the decision to bypass in-game spots was more a question of strategy, and less one of cost. But for brands without the $5.5 Million to spend on a 30-second national spot, there are still a number of ways to get in front of large audiences excited about the Super Bowl without buying a national spot.

The Super Bowl creates unique viewership patterns before and after the game that provide opportunities to buy high-profile inventory at a fraction of the cost of a national in-game spot.

Leading up to the game 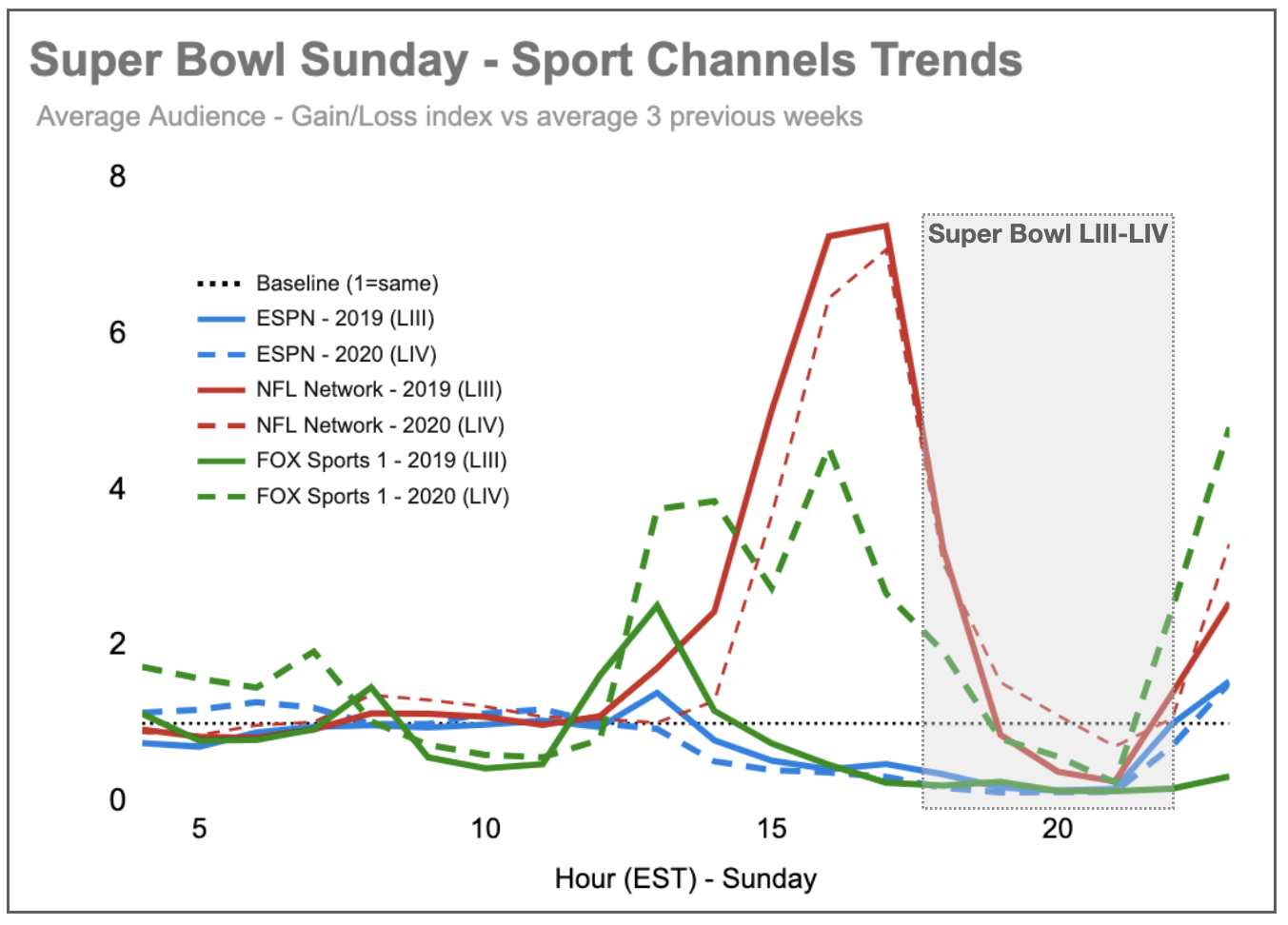 Networks that host the Super Bowl typically see a big boost in viewership after the game. The networks often promote their post-game content throughout the game, and this contributes to an increased viewership of the non-sports content that follows, particularly the “Lead-out” program that lands immediately after the postgame show.

The chart below shows the sustained high ratings for network programming for the hours following the conclusion of the game: 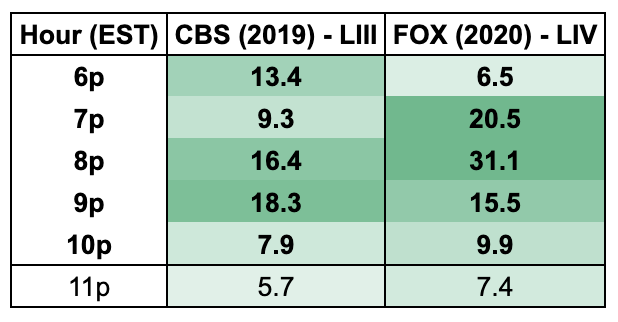 Though nowhere close to the cost of advertising in the Super Bowl itself, CPMs generally remain high for pregame and postgame content at the national level.  Brands can access this inventory at significantly lower spot costs by taking advantage of national-local spots, a unique selection of inventory that allows for local stations to cover the national spots with local spots if they can sell it . Given the difficulty in projecting how much of the national airing will be covered up by locally-sold ads, national-locals are often sold at spot costs that range anywhere from 30-70% the rate than its national counterpart, providing an ideal mechanism for brands to test into premium inventory at a much lower entry point. See here for our deep dive on the topic.

Local networks air their own pregame and postgame programming, and these also represent opportunities for capitalizing on the halo of interest surrounding the Super Bowl. Rates for this programming vary considerably by local market, with sub-$100k spots in some smaller markets and near-$1m spots in larger ones.

There is no other advertising opportunity like in-game Super Bowl inventory, and that’s why it remains a special and intense area of focus every year. It’s unique in every dimension: massive reach, instant caché, an unparalleled opportunity to kick-off a campaign, launch a new product, to start a conversation with your customers and potential customers, or signal to competitors that the brand is on the rise.

But that doesn’t mean there isn’t real opportunity on the margins - particularly if you know where to look for it.